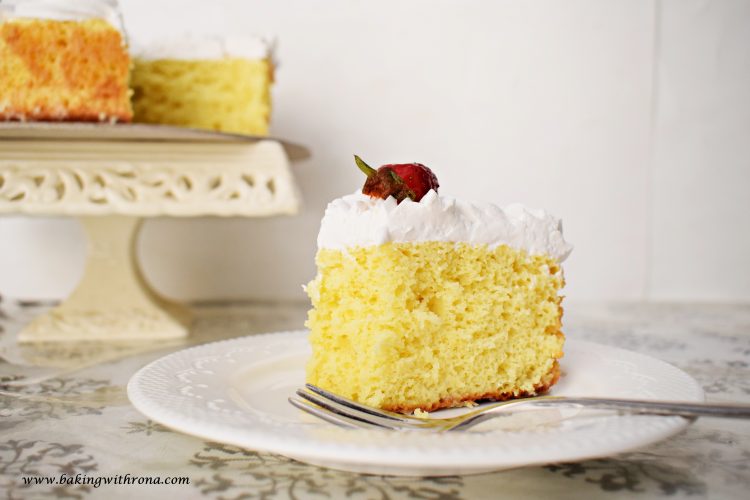 I’ve heard of Tres Leches cake for years but it was only recently that I actually tasted it and boy was it delicious!! When I finally attempted to make it, I realised this cake is pretty simple to make. Right here is a failproof recipe for making Tres Leches. It makes for a wonderful dessert just like the Dulce De Leche cake I posted earlier.

What is a Tres Leches Cake:

Tres leches like the name suggests, means three kinds of milk, which is a combination of evaporated milk, condensed milk and regular whole milk. I’ve yet to meet someone who can resist condensed milk, so imagine how quickly you will have a slice of this cake that is soaked in a mixture of it. The evaporated milk and whole milk balance off the sweetness, so you won’t have to stop at one piece. Yayyy!!!

Now if you are googling evaporated milk, let me help you out. It’s been one of the main reasons I took so long to make a tres leches cake mostly because I didn’t what it was. You won’t believe how simple it is to make your own. All you have to do is boil milk and reduce it to half it’s quantity. That’s it!!! Don’t think of using substitutes like coconut milk in this recipe, it just won’t have the same charm. Just make your own. I’ve added detailed instructions in the notes below.

How to make a Tres Leches Cake:

Making a tres leches cake is very simple. All you need is a little extra time. There are 3 elements to this cake. One, the sponge cake, two the mixture of 3 milks and three the whipped cream that goes on top. That’s it. The cake and the whipped cream won’t take long to make and the milk mixture will come together rather quickly. What this cake does need time for is for the cake to soak in the three milks mixture once it has baked. While it’s often mentioned 3-4 hours is a minimum, I found it best to let the cake soak overnight.

Also with Diwali coming up, I thought this could be the perfect dessert. A lot of Indian sweets use reduced/evaporated milk, so you’ll definitely find a familiar flavour in this cake. Happy Baking.

For the milk mixture:

1/2 cup evaporated milk.(Read notes to make your own)

To soak the cake :

To assemble the Tres Leches cake: