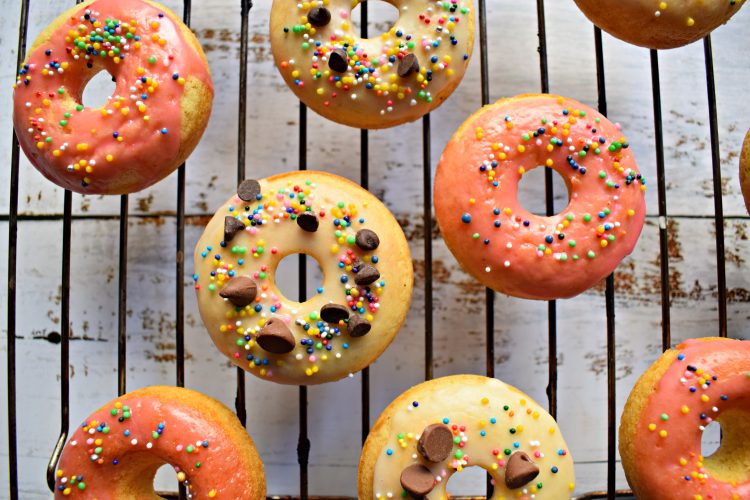 Baked doughnuts are a much-needed invention. They’re cute as hell, healthier than fried doughnuts and twice as quick to make too. This is a no yeast recipe for doughnuts and you are going to love them. Trust me, these are a delight!!

Baked donuts without yeast are light, fluffy and melt in your mouth. While they may taste slightly different from traditional doughnuts, considering they are made without yeast, they evoke the same joy in every other way. Speaking of no yeast, have you tried the No yeast pizza yet?

I’ve also included a simple glaze for these doughnuts. For a baker, it seems like decorating the donuts is just as much fun as making them. Get imaginative with pairing them with different glazes.

Melted chocolate or ganache will work very well too. You can also colour the glaze using food colour and let them really stand out. If you got kids, let them go rogue decorating these. So much fun.

You can store these doughnuts in the refrigerator for up to 4 days. To let them regain their soft texture warm them up for just about 10 seconds in the microwave before serving them and they’ll be as good as fresh.

You will require a doughnut baking pan to bake these donuts. They’re easily available online. They don’t cost much and once you’ve tried these donuts, you are going to make good use of that pan for sure.

I found a good doughnut pan on Amazon for Rs 350. To prep the tin, you can lightly grease it with oil/butter or using a cooking spray.

a pinch of salt

a pinch of nutmeg

Sprinkle and chocolate chips for decorating the donuts.

(See above for pictures)

To decorate the doughnuts:

(see above for pictures)

Just jazzed up my regular chocolate cake with some ganache, chocolate & Oreo

You'll find the recipe for the chocolate cake and ganache on my blog
www.bakingwithrona.com

Although I found it challenging to make a fondant cake, considering I've been off my fondant game for a bit, my 5 year old Zi thought his "Ship Cake" was the best ever. Definitely was worth the 2 days of prep work this gigantic cake needed.

I wonder what cake he'll ask for next year.

And this boy just turned 5. This little champ loves asking questions about EVERYTHING!, will make conversation with people of all ages. A keen observer, with vivid imagination, loves to dance and is an absolute old soul at heart. Zi, you have my endless adoration and love.

These are the prettiest cupcakes I ever made.

SPONGE CAKE WITH SPRITE:. Make this light and airy sponge cake using just a few simple ingredients. Adding sprite to the cake gives it a lemony and soft texture and you can skip using baking soda and baking powder too.

Head to the blog for the recipe. You'll also find the link in my bio.

Carrot Chocolate Cake: A quick #eggless cake to get this weekend going.

Mix all ingredients together in a bowl, until you have a smooth batter. Bake in a greased loaf tin, in a preheated oven at 180C for 45 mins.

STEAMED MANGO PUDDING: Apparently you can do more with mangoes than cheesecake and mango fool. This humble pudding is no fuss, low on effort but ever so comforting and inviting.

Head to my blog for the recipe.
You'll also find the link in my bio.

BAILEYS CHEESECAKE: This has got to be the ultimate dessert!!! Pair it with coffee or chocolate and you have a showstopper on your hands. I've used my simple cheesecake recipe with just a couple of changes to make this beauty.

Head to the blog for the recipe. You'll also find the link in my bio.

Would you like to see this recipe on the blog?